I've never had such problem with After Effects. I tried import an MP4 file into After Effects but only image without video. I didn't get any error message and it just ignored the video itself. I tried some other MP4 files and all succeed.

How to Convert MP4 to After Effects?

Faasoft Video Converter (for Mac, for Windows), the best all-in-one video converter tool, allows you to convert all MP4 files encoded with different audio and video codecs to After Effects supported MP4 MPEG-4 with three steps. With its batch conversion feature and built-in editing tool, you can optimize multiple MP4 files before importing them into After Effects.

A Step by Step Guide to Convert MP4 to After Effects

To convert MP4 to After Effects with this program, the first thing you need to do is to download the trial version. Note that two versions are available and make sure you've got the proper version. In the following step by step guide, we will take the Windows version as example.

Once the installation is done, launch Faasoft Video Converter on your computer. On the top of the program, there is a button named "Add File" and hit it. Select the MP4 file that you need to import into After Effects and click "Open" button to load it.

As mentioned earlier, Faasoft Video Converter supports batch convert MP4 files. To add multiple MP4 files, you'd better to put all MP4 files into a folder and drag the folder to the program.

It is easy to choose the output format. Just click "Profile" button. From the pop-up menu, there are multiple formats that you can select. We recommend you to designate "MP4 MPEG-4 Video (*.mp4)" as the output format from the "General Video" category. 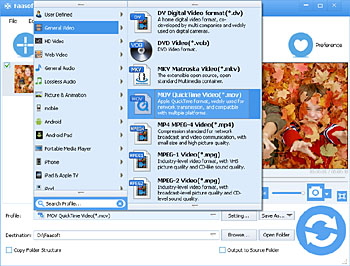 Click "Destination" button to select where the output file load to. By now everything is ok, click the round "Convert" button and patiently wait as the program is processing the MP4 conversion. It is so efficient that the conversion will be done quickly. Once the conversion process is finished and you can get the converted MP4 file by clicking "Open Folder" button. That's it!