I would like to know if somebody knows how to convert an MSWMM file into other formats because I did a small movie with the windows movie maker and I would like to post it into Facebook but it is saying that the format is not supported and also when I tried to use other converters, this type of formats MSWMM cannot be chosen to be converted.

MSWMM is the project file of Windows Movie Maker, not a real video format, which is only compatible with Windows Movie Maker, so that it is impossible to play MSWMM files on fashionable portable devices and players or directly convert MSWMM to more popular formats like AVI, MP4, MOV, etc.

The following article will introduce a way to play MSWMM project files or convert MSWMM to AVI, MP4, WMV, etc with ease.

Part 1 Save MSWMM to WMV or MP4

Before converting MSWMM to other video formats, you have to save it as a video first in Windows Movie Maker.

Run Windows Movie Maker and drag the MSWMM that you want to convert to WMM to add MSWMM file. Click File menu to select Save Movie File... to save it as WMV or MP4 and also choose the location on your computer.

Note: It only allows you to save MSWMM as WMV format, if your Windows Movie Maker is 2011 or lower. 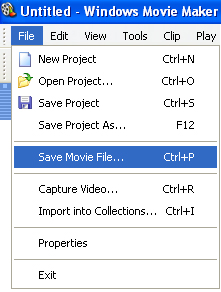 Step 2 Set output formats
Click "Profile" drop-down button on the left side of "Setting..." button of this tool to choose output format as your desire.

Step 3 Convert MSWMM to other formats
Just hit the round "Convert" button on the lower right corner to finish converting MSWMM to AVI, MKV, FLV, MP3, WAV, M4A and more.

Once the conversion is done, you can play MSWMM project files anywhere.

The mswmm file extension is used for project of Microsoft Windows Movie Maker, which is a part of Microsoft Windows XP, Millennium and Vista editions. MSWMM file doesn't include any multimedia data, only their location and settings for a final movie. Similar to .wlmp, .mswmm can only be opened by Windows Movie Maker. If you are intent to play MSWMM files in iTunes, iPhone, iPad, Android, PS3, Xbox 360, etc or edit MSWMM in iMovie and Final Cut Pro, you'd better to follow this tutorial to first save .mswmm as WMV or MP4 and then convert the exported WMV or MP4 files to the formats that you need.

In addition, there is another article which introduces a wonderful WLMP Converter to convert WLMP to MOV, AVI, FLV, MPG, MP3, WAV, and M4A and so on.