How to Convert WMV to QuickTime on Mac and Windows?

WMV is a video format powered by Microsoft, which is well known and widely used. However, when it comes to WMV in QuickTime, people can be at a loss what to do. That's because WMV is not compatible with QuickTime so far. 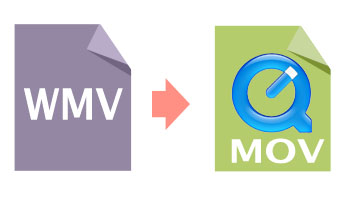 This widely used WMV to QuickTime Converter offers very fast conversion speed with nearly zero quality loss in converting WMV to QuickTime MOV format. After the transformation of WMV to QuickTime, the compatibility of WMV with QuickTime has risen greatly. In addition, you can also convert other video formats that are not recognized by QuickTime to QuickTime more popular formats like MOV, MP4. These video formats include MKV, AVI, MP4, MOV, FLV, ASF, MXF, WebM, OGV, 3GP, RMVB, AVCHD, MTS/M2TS, DivX, Xvid, TOD, MOD, TP, and Apple ProRes and so on.

It is not only a good helper for QuickTime users but also for Apple users, with which, Apple users can convert almost all kinds of video and audio files to Apple devices famous formats, for example, convert FLAC to iTunes, convert MP4 to iMovie, convert AVI to iPad, convert MKV to iPhone, convert FLV to iPod.

What's more exciting is that this amazing converter can make your digital life easier: convert more than 160 kinds of video and audio formats, has both basic and advanced settings to optimize music and movie, download movie or music online and act as a player with high compatibility.

Why don't download and install such a useful tool to have a try today? After run it, follow the steps below to convert WMV to QuickTime.

Step 1 Import WMV to the software
Click "File" to open the drop-down menu, and then select "Add File (s)" to add WMV files that you want to convert. Or hit "Add File" button and open WMV files from your computer. There is also an easier way to load WMV file: simply drag and drop WMV file to the converter interface.

Or choose "HD MOV Video (*mov)" as output format from "HD Video" category, if your source WMV video is HD.

This article will help you solve various kinds of "QuickTime WMV" issue as below: