What Is Frame Rate?

In motion pictures, television, and in computer video displays, the frame rate is the number of unique consecutive frames or images that are projected or displayed per second. Frame rate is measured in frames per second (fps). The more frames recorded per second, the more accurately motion is documented onto the recording medium.

The standard film cameras projection speed is 24 fps. When playing movies on NTSC television, it needs a process named telecine or pulldown to convert 24 fps movie to 29.97.

Better still, Faasoft Frame Rate Converter not only has the feature to convert Frame Rate but also can optimize video clips in many ways such as add effect/watermark/background music to video, change video volume level/bitate, join videos into one, split video by chapter, compress movies to smaller size, remove/extract subtitles from video clips and rotate video.

Make Preparation: Free download and install the ideal Frame Rate Converter on Mac or Windows and then follow the steps as bellow to finish Frame Rate conversion. 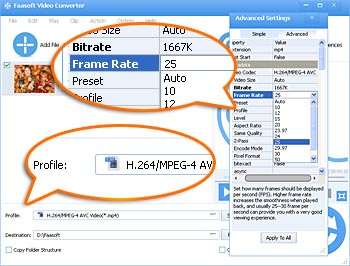 Step 1 Add video to the program
Simply drag and drop video that you want to adjust frame rate to the main interface of the program.

Step 2 Change Frame Rate
After the file is loaded, click "Setting..." and then an "Advanced Setting" window will pop up. Click "Advanced" > "Video Codec" > "Frame Rate". In the "Frame Rate" box, select the Frame Rate you want.

There are three main frame rate standards in the TV and digital cinema business: 24p, 25p, and 30p.