The aspect ratio describes the proportional relationship of the video image between its width and its height. It is commonly expressed as two numbers separated by a colon, as in 16:9. Two common videographic aspect ratios are 4:3 (1.33:1), the universal video format of the 20th century, and 16:9 (1.77:1), universal for high-definition television and European digital television.

16:9 (1.77:1) (16:9 = 42:32) is an aspect ratio with a width of 16 units and height of 9. Since 2009, it has become the most common aspect ratio for sold televisions and computer monitors and is also the international standard format of HDTV, Full HD, non-HD digital television and analog widescreen television.

4:3 (1.33:1) is an aspect ratio with a width of 4 units and height of 3. It is for standard television and has been in use since the invention of moving picture cameras and many computer monitors used to employ the same aspect ratio.

How to Change Aspect Ratio of Video? 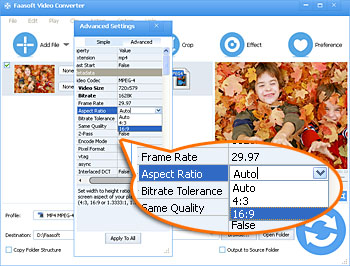 Step 2 Change MP4 aspect ratio
After the MP4 file is loaded, click "Settings..." button of the program to go to "Advanced" tab. Then click the "+" on the left of the "Video Codec" to expand the video parameter group.

Click the drop-down button of "Profile" to select the output formats as you want.

It is easy to change video aspect ratio on Windows or Mac with the above full guide! And you will never worry about the following situations:

What apps do you use to reconvert such videos to an aspect ratio better suited to to fit either a regular desktop or LCD screen size?