With the Apple users' explosion, more and more people have a burning desire to play MKV files on their Apple portable devices or player, for example, iPad. However, from Apple official website, we learn that MKV is not supported by iPad series. So it becomes a big issue to play MKV on iPad Air/iPad Mini/iPad 4/iPad 3/iPad 2/iPad for these people who have tons of MKV files in hand.

Luckily, the following article introduces a step by step guide on how to play MKV on iPad for both Mac and Windows users.

How to Play MKV on iPad?

In order to play MKV on iPad Air/iPad Mini/iPad 4/iPad 3/iPad 2/iPad without any hassle, a widely recommended solution is to convert MKV to iPad more popular formats like MP4 with Faasoft MKV to iPad Converter for Mac and Windows.

Now start the conversion from MKV to iPad after you download and install this ideal MKV to iPad Converter. 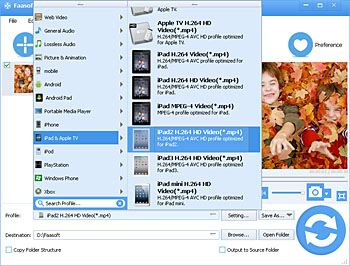 After follow this detailed guide, you will never encounter the issues below: