I am trying to put an HD 720p mp4 on my Galaxy S3, but for some reason windows tells me to convert it or it won't play right. I thought the s3 could play HD mp4 videos, but instead I have to convert it and the quality is lost. If I don't convert it, the phone will simply tell me it can't play it.

I am looking into buying a tablet, but want to make sure that I choose one that meets all of my needs. I need a tablet that will play mp4 videos. These mp4s are all converted from DVDs.

As we all know, Android does announce that MP4 is one of Android compatible formats. However, people still encounter the issue of Android won't play MP4. Why? The reason is MP4 is a container format which means this format may contain various kinds of audio and video codecs while Android is only compatible with MP4 encoded with MPEG-4 or H.264 AVC.

The following step by step guide introduces a powerful tool to solve "Can't Play MP4 on Android" issue so that you can play any MP4 files in Android phones and tablets.

The wonderful tool is named Faasoft MP4 to Android Converter which makes it become more efficient to convert any MP4 video to Android formats. Apart from that, it does work like a charm in the following aspects: 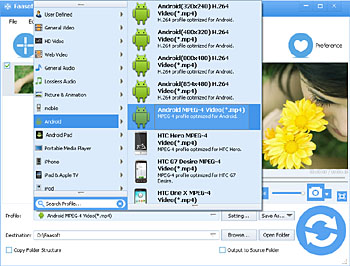 Step 1 Import MP4 files
Click "Add File" button of the program to open MP4 file from your computer or simply drag and drop MP4 file that you want to convert to the program main interface.

Step 2 Set output format
Click the small triangle in the right side of "Profile" button of the program to choose "MP4 MPEG-4 Video (*.mp4)" from "General Video".

Tips: You can also select output format from "Android" or "Android Pad" category.

It will never be a problem to play MP4, AVI, WMV, MOV, MKV, FLV, ASF, etc on Android mobiles and tablets with this professional yet easy-to-use MP4 to Android Converter and all the following demands fulfilled: