AVI Joiner - Join Multiple AVI Files into One without Re-encoding

AVI is a multimedia container format and since 1992 introduced by Microsoft, AVI format is known well all over the world.

Want to join multiple AVI files - maybe download from popular video sharing website like YouTube, or get from your family, friends and clients or recorded by cameras - into one? Still dig around hard to seek a way to merge AVI files while keep the source files format or as well as convert AVI to other video formats? The following article introduces two methods to join AVI files with a superior AVI Joiner Mac and Windows:

The widely known AVI Joiner is named Faasoft AVI Joiner for Mac and Windows which can not only merge AVI files but also almost all kinds of video and audio clips, for example, MP4, MOV, WMV, MKV, FLV, MP3, FLAC, M4A, etc. Apart from merge function, it has many other basic editing features such as crop, rotate, compress, add effect/subtitle/audio/watermark, split and remove audio/subtitle and so on. Better still, this useful AVI Merger allows you to do advanced edit like adjust bitrate, change channel, etc.

In addition, this amazing tool works as a video and audio converter too, with which, you can convert more than 160 kind of video and audio formats on both Mac (Yosemite included) and Windows (Windows 8 included).

More functions are waiting your explore.

Free download and install this professional AVI Merger and run it. When all the preparatory work has been completed, just follow the guide as shown below to combine AVI files. 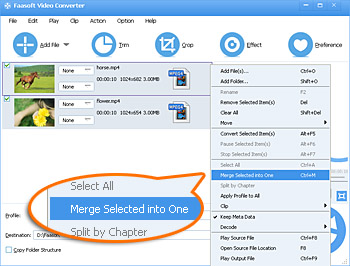 Step 2 Settings for Joining AVI files
All AVI files will be loaded in a flash and then select the AVI files that you are intent to combine. Click "Merge Selected into One" from context menu option.

The merged file with name like "Merge 1" will show below the source AVI files and you may change the file name by just clicking the original file name and entering your desired one.

Method One: click "Profile" drop-down button of the program to select AVI as output format if you want to merge AVI files without re-encoding;

Method Two: click the small triangle of "Profile" button to choose output format as your desire if you want to join AVI files as well as convert AVI to other video formats.

Step 3 Start merging AVI files
What you need to do in the last step is click the big and round "Convert" button on the main interface of the program to start and finish joining AVI files.

Although there are lots of AVI joiners on market, Faasoft AVI Joiner stands out the most with powerful features and great output quality. With it, the following issues will be solved simply: