This Guide Introduces a Way to Convert MP4 to MPEG, MPEG-1, MPEG-2, MPEG-4, and MPG Easily

In order to fulfill all the above needs, we strongly recommend a powerful tool - Faasoft MP4 to MPEG Converter to you. 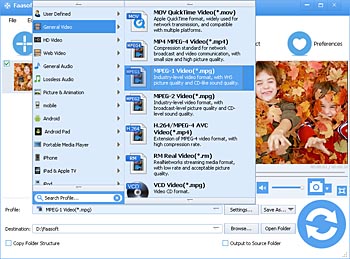 Download and install this great MP4 to MPEG Converter and launch it. Then follow the three steps as below to convert MP4 to MPEG, MPEG-1, MPEG-2, MPEG-4 and MPG smoothly.

Step 1 Add MP4 file
Drag and drop the MP4 file that you want to convert to MPEG to this MP4 to MPEG Converter. Another method is click "Add File" button of the program to open MP4 file from your computer.

Step 3 Finish MP4 to MPEG conversion
Click "Trim" button of the program to go to "Video Edit" window to optimize MP4 file as your desire.

After all settings satisfied, click the big "Convert" button to convert MP4 to MPEG in a flash.

MPEG file with extension .mpeg or .mpg contains video compressed by MPEG-1 or MPEG-2 codec. MPEG-1 video is used in VCD. MPEG-2 is used in DVD, video recording like camcorder, and distribution like DVB.

MP4 is a wildly used video file format, which uses MPEG-4, H.264/AVC, H.265/HEVC to compress video, and AAC to compress audio. With these advanced encoders, MP4 file has much higher compression rate than MPEG file at the same quality level.