SWF to FLV - How to Convert SWF to FLV on Mac and Windows?

Difference between SWF and FLV

SWF is a vector animation file format. Vector means you can scale it to any size while keeping its clarity. The details of the image such as edges, corners are still clear and crisp. The shapes and curves of the image are drawn by human artists, instead of being shot by cameras. Those images or photos shot by camera are called raster image. They consist of a rectangle of pixels. If you scale up the image, the details will become blur or blocky.

However, SWF can also contain images of video clips shot by camera as elements of the animation. If a SWF file contains only video clip and doesn't contain any vector image, it becomes a pure video file.

FLV is a pure video format optimized for network playing. It usually uses VP6 or H.264 as video codec. This format is widely accepted by most video sharing website.

SWF files are usually very small and easy to transfer over internet, but playing SWF vector animation consumes much CPU power and battery energy, so it is rejected by Apple on its mobile devices such as iPhone, iPad. On the contrary, many devices have specific chip to decode H.264 video, which will heavily relieve the stress of CPU and battery.

If the scalability is not so important and you want your animation to be accepted by more mobile device, you should convert your vector SWF into video file such as FLV.

It is so powerful, which can not only convert SWF to FLV, but also supports converting SWF to most popular video formats like SWF to MP4, SWF to AVI, SWF to MOV, SWF to MKV, WMV, ASF, WebM, MXF, DV, RM, MPEG, etc. And not only that, you can also extract audio from SWF container and then save the extracted audio files into MP3, WAV, AAC, M4A, AC3, DTS, CAF, AIFF, and FLAC and so on famous audio formats. In this case, you can enjoy SWF files on almost all kinds of popular players and portable devices like iTunes, QuickTime, Windows Media Player, iPhone, iPod, iPad, Android, Xbox, PlayStation, BlackBerry and so on.

In addition, this SWF to FLV Converter has strong compatibility, which works on both Mac (Yosemite included) and Windows (Windows 10 included). 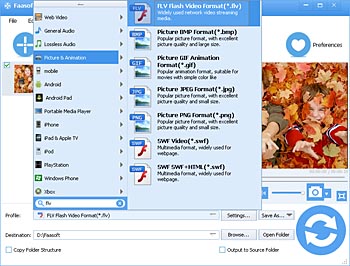 Tips: This step is not necessary if you are very pleased with everything of the output file.

Step 4 Convert SWF to FLV
What to do in the last step is click the big "Convert" button on the lower right corner of the program to finish the conversion from SWF to FLV.

Can you imagine how fast and simple the conversion from SWF to FLV? In fact, this SWF to FLV Converter has many other powerful features and one of them is help you convert FLV to SWF if it is what you need. In a word, converting SWF to other video and audio formats or vice versa is no longer a problem.