MP3 Joiner Mac/Windows - How to Join MP3 Files without Re-encoding?

MP3 is a common audio format for consumer audio streaming or storage, as well as a de facto standard of digital audio compression for the transfer and playback of music on most digital audio players.

Every day, numerous people spare no effort to seek a powerful MP3 Joiner in order to join tons of MP3 clips into one for storage or playback. Take a few seconds to glance over the following examples and you will know how high the demands for MP3 Joiner.

To satisfy the needs of customers, here, we mainly introduce an efficient and reliable MP3 Joiner for you.

Run the wonderful MP3 Joiner on your Mac or Windows. Now, just follow the three steps to join MP3 files.

Step 1 Add multiple MP3 files
There are four methods to import MP3 files into the program. Here we list the two easiest ones:

Method One: Click "Add File" button to open the MP3 file that you want to join;

Method Two: Drag and drop the folder where MP3 files are to the program. 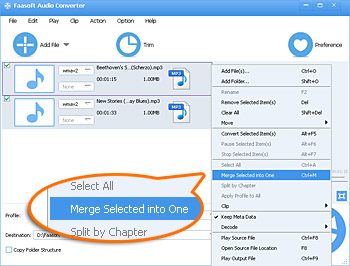 Step 2 Set for combining MP3 files
After all MP3 files are loaded, select them and then click "Merge Selected into One" from context menu option. The joined MP3 files will be named like "Merge 1". Double click "Merge 1", and you can change the name of the joined file.

Choose other audio formats as output format if you'd like to change the source format.

In this article, we show an easy way to join multiple mp3 into one without re-encoding or convert the source MP3 files into other audio formats like WAV, AAC, M4A, etc. It is really worth a shot.