Importing 32 bit WAV to iPhone, iPad, iPod, Logic Pro, Garageband, Samsung Galaxy, etc is too difficult. The question on the lips of many people has been whether these players and devices really support 32 bit WAV files. Let's see two typical examples.

Example 1: I have recently purchased a sample pack to use in logic pro, now when I import these WAV files onto a track, there is no output at all, the channel doesn't even recognize that there is audio on the track just complete silence, now from looking at the WAV files there are all 32bit, now if I import another WAV file I have laying around it will play it fine however these are all 24bit. So now my question is how to convert 32 bit WAV to 16 bit WAV.

Example 2: I am getting an error that says "the file you are trying to import is 32 bit format and cannot be used". Really, with all the modern technology at their disposal, why can't Apple make iPods that can read high quality 32 bit WAV files?

The reality is that the above player and devices such as Garageband, iPod, Samsung Galaxy, etc will not play WAV files encoded at bit width higher than 24 bit, like 32 bit WAV. The similar situation exists when you play 32 bit AIFF files in iPod, iPad, iPhone, iTunes, etc.

The above task will be finished by the assistance of a professional 32 Bit Audio Converter for Mac and Windows, which is designed to help convert 32 bit WAV to 24 bit WAV and 16 bit WAV as well as convert any 32 bit audio to 24 bit AIFF, 24 bit WAV, 16 bit AIFF, 16 bit AIFF.

If necessary, you can use this 32 Bit Audio Converter to convert among almost all kinds of audio formats like MP3, OPUS, ALAC, OGG, OGA, AAC, M4A, M4B, MKA, AC3, DTS, FLAC, WMA, 3GA, APE, CAF, MPC, VOC, VOX, QCP, AU, AUD, AIFF, AIFC, GSM, etc. In fact, this powerful 32 Bit Audio Converter provides some basic editing functions for you such as merge multiple audio files into a big one, split FLAC, MP3, WAV and other audio files with CUE, adjust audio volume, change the channel and so on. 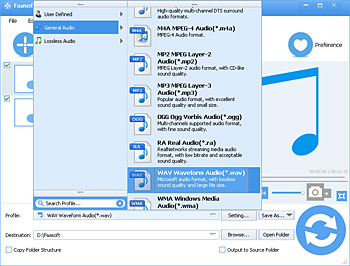 Firstly, simply download and install this 32 Bit Audio Converter. And the following guide will tell you how to convert 32 bit WAV.

Step 3 Convert these audio files
The last step is to start converting the files right away by hitting the "Convert" button.

Digital audio consists of a series of samples of the wave form of sound wave. Each sample is represented as a digital number. This number can be stored as 8-bit, 16-bit, 24-bit, 32-bit integer or 32-bit float. The more bits that are used, the greater the precision we get, but the more disk space and memory is used as well. 8-bit sample is usually used in telephone to record human voice. 16-bit sample is most common in most music files. 24-bit samle is used in some high quality or lossless music like FLAC. 32-bit sample is used in some professional music recording or editing devices.