PlayStation official website says PS4 is compatible with MKV format. However, a question arises: PlayStation 4 doesn't recognize MKV file or there is only video or audio when play MKV in PS4. So people are confused about "Can PS4 play MKV" or "Does PS4 play MKV". The following is a typical example:

I was able to setup the media player to read my music which was by adding the folder to the homegroup and sharing the file with the MUSIC (folder) under libraries folder. Problem is, when I do the same thing for my movies that are all MKV files and add them to the Videos (folder) in my server under Libraries. Ps4 is not able to read them. My movies play fine when in VLC player or Windows Media. Any ideas why is ps4 not able to read my movies but it does with music. Please Help. 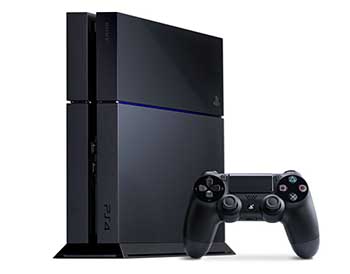 Why does PS4 refuse to play some MKV files? MKV is a container format which can hold unlimited number of video, audio, picture, or subtitle tracks in one file, but PS4 can play MKV files with the following specification:

Once the MKV you add to PS4 does not meet the above requirements, the problem occurs.

To avoid such problem, what you need to do is to convert any MKV files to PS4 standard MKV format. If you choose to convert MKV file to solve the trouble, you need the help of Faasoft MKV to PS4 Converter.

This MKV to PS4 Converter offers an ideal solution to "PS4 won't play MKV file": convert unsupported MKV to PS4 more compatible format for playback and then you will never be puzzled by "Does PS4 play MKV" or "Can PS4 play MKV". Not only that, it also supports converting many other PS4 unsupported video clips like FLV, MXF, WebM, WTV, ASF, MOV, RMVB, MOD, TOD, etc and unrecognized video container like MP4, AVI, etc to PS4 more friendly formats. Besides PS4, this best converter has the feature of converting all kinds of video formats for playback on PlayStation 3, PS Vita, PS2 and more, such as play MKV on PS3, play WMV on PS Vita, play FLV on PS2, play MXF on PS3, play WTV on PS Vita and so on.

Before import the converted MKV files into PS4, you can also optimize them as your desire by changing the parameters like increase or decrease the volume of the video, adjust the video bitrate/size/sample rate, change audio channels, combine several MKV into one, etc.

Here the detailed steps to convert MKV in Windows are showed. The conversion process is extraordinary simple with nearly 100% original quality output. If you are Mac users, the way is just the same. To begin with, download and install Faasoft MKV to PS4 Converter. 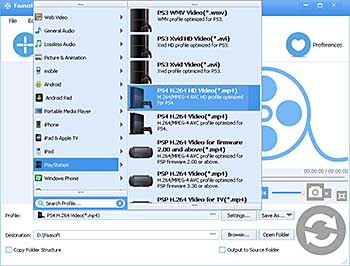 Step 1 Add MKV file
Once you have run the program, open it and there are two ways to import the files to be converted. First, just click "Add Files" button to select and load the MKV file from your computer. Second, directly drag your MKV files to the program.

Here we list the supported video formats of PS4 for convenience.