Apple TV MKV - How to Stream MKV to Apple TV to Play MKV on Apple TV?

Apple TV is a tiny digital media player which allows you to enjoy a whole world of movies, TV shows, sports, music, and more. So far, the latest version of Apple TV is the third generation, in up to 1080p HD. The device also plays content from any Mac OS X, iOS device or Windows with AirPlay or iTunes.

Apple TV is compatible with the following video formats: 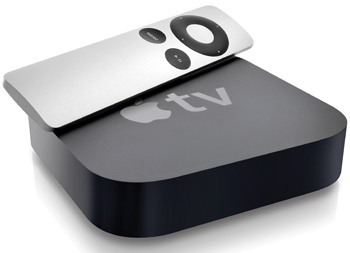 The first thing to know or has well known is that there are only two official and free methods to stream video files to Apple TV from computer: iTunes or AirPlay. Unfortunately, neither of the two supports MKV as the input format. Likewise, you'll be greatly disappointed if you turn to other alternatives since most of them are not only expensive but also have inevitable defects: only support several formats, require installing some plug-ins, and with an endless line of embedded goods, etc.

This tutorial will show the simplest and widely used way to stream MKV or HD MKV to Apple TV to play MKV on Apple TV, Apple TV 2 and Apple TV 3.

How to Stream MKV to Apple TV?

Better still, Faasoft MKV to Apple TV Converter works as a built-in editor too, so that beautifying video files as your liking before conversion becomes true. 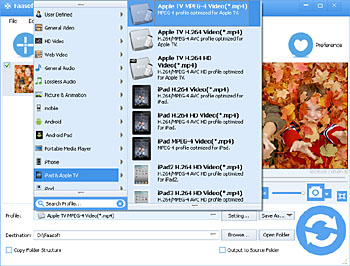 How to Convert MKV to Apple TV Format?

Stream MKV to Apple TV via AirPlay or iTunes

Via AirPlay: Firstly, to use AirPlay, you need to prepare one of the following devices: iPhone 4 (or later), iPad, iPad mini, or iPod touch (4th generation or later). Add the converted MKV movies to iTunes and sync to your iOS device.

Secondly, be sure iOS device and Apple TV are in the same Wi-Fi network; start play the video on your device, and then swipe up from the bottom of your device screen to access Control Center and tap AirPlay; finally, tap the name of the device you want to AirPlay to.

Via iTunes: Firstly, add the converted MKV videos to iTunes. Then, go to iTunes > Preferences, choose Apple TV, and make sure "Look for Apple TVs" is selected.

Secondly, on your Apple TV, choose Settings > Computers > "Connect to iTunes," and note the passcode displayed; in iTunes, select the Apple TV (below Devices), and enter the passcode.

Thirdly, click the Summary button and select one of "Automatic Sync" and "Custom Sync".

Now, all content are streamed to Apple TV for enjoyment. Could you image an easier way to do this than Faasoft MKV to Apple TV Converter?