Assuming that you shot MXF video with Panasonic P2 502 or other professional camcorders, you would like to import it into Final Cut Pro for edit. However, it failed. You have to wonder: Does Final Cut Pro support MXF? Here is the answer: FCP does support MXF as an import format only if your MXF files are from archives or asset management systems via third-party plug-ins. When the imported MXF file doesn't meet the requirement, FCP will refuse it. So far, the effective solution is to convert MXF to Final Cut Pro more popular Apple ProRes or DV.

The following part of the guide will teach you how to archive the goal. Read through this guide and you will know how to convert MXF to Apple ProRes or DV for edit in Final Cut Pro X, Final Cut Pro 7, etc.

One of the best desktop MXF to FCP Converter is Faasoft Video Converter (for Mac, for Windows). With it, you can easily solve "FCP won't import MXF" issue by converting MXF to Final Cut Pro more compatible formats like Apple ProRes or DV. It supports converting any MXF footages shot from Sony, Panasonic, HVX200, Canon and other camcorders for editing in Final Cut Pro, Final Cut Pro X, Final Cut Pro 7, etc. Except MXF, Faasoft Video Converter can convert video in ASF, SWF, MP4, MOV, WMV, MKV, WTV, AVI and more so that people can edit them in FCP. Moreover, it can convert video for almost all popular editors like Sony Vegas, After Effects, iMovie, Windows Movie Maker, etc.

Can't wait to give such a powerful video converter a try? The first step is to download and install Faasoft Video Converter on your computer. It has two versions and in this article, we will take the Windows version as an example. Next, follow the steps as below to convert MXF footage.

Activate the program on your computer and you can see the main interface of Faasoft Video Converter as the right pictures shows. Just click "Add File" button to select and load MXF file that you need to edit in FCP. The added MXF video will appear as thumbnails in the task list.

If you have imported multiple MXF footage and want to merge them into one, select all the MXF files and right-click to choose "Merge selected into one". And the combined MXF file shows with the extension name of "Merge 1". 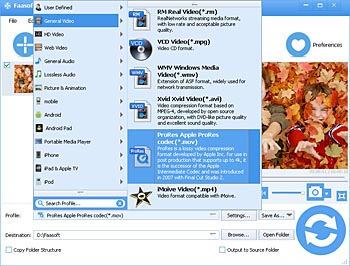 So far everything is done, click "Convert" icon to start the conversion process. The program can do the job itself and all you have to do is to wait. When the process completes, you can edit MXF file in FCP as your wish.