FLV to AVI - How to Convert FLV to AVI on Mac and Windows?

FLV is a popular format which is widely used for sharing videos online. However, it is not compatible with Windows Media Player, Windows Movie Maker, PS3, Xbox 360, BlackBerry, Adobe Premier, etc. If you intent to enjoy the downloaded FLV video and movie on the above mentioned players or devices, you'd better to convert them to AVI and other popular formats.

The following article will introduce an ideal FLV to AVI Converter and a step by step guide on how to convert FLV to AVI for playback.

Note: If you would like to convert FLV to MP4 to play FLV on iPhone, iPod, iPad, iTune, QuickTime, iMovie, etc, read this relevant article How to Convert FLV to MP4 with Ease. If you want to extract MP3, WAV, M4A, AAC, AC3, etc from FLV video, just follow this article Easily Convert FLV to MP3 on Mac and Windows.

Make preparations: free download and install this powerful FLV to AVI Converter. After launch it, follow the step by step guide to easily convert FLV to AVI. 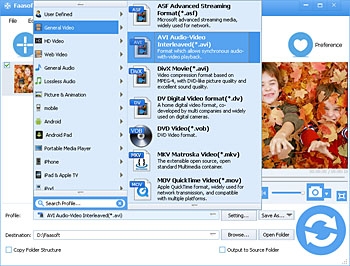 Step 1 Load FLV file
Just drag and drop FLV files to the main interface of the FLV to AVI Converter, and you will see the FLV file is loaded instantly. There is another way to add FLV file to the software. Click "Add File" button to import your FLV file to the program.

Tips: If the downloaded FLV file is HD, please designate "HD AVI Video (*.avi)" as output format from "HD Video" category. Moreover, you can select many other popular video formats as output formats just as your desire.

Step 3 Convert FLV to AVI
When the output format is set, just click the big "Convert" button to start and finish FLV to AVI conversion with excellent output quality and conversion speed.

With this detailed guide, you will solve the following issue with ease: